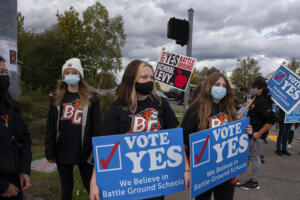 The levy’s passing elicited a sigh of relief from Battle Ground Public Schools Superintendent Denny Waters, who said concerns of the levy’s failure routinely kept him up at night.

The levy provides support for educational programs such as Advanced Placement classes and a greater variety of electives, as well as extracurricular programs and sports. It will cost the voters an estimated $1.99 per $1,000 of assessed value, which is a decrease from the $2.32 per $1,000 currently being paid. The new cost is the lowest of any K-12 tax rate in Clark County, according to district officials.

Voters rejected the levy in a February special election — a failure that Waters attributes to education still largely operating remotely at the time.

“We’re back in schools now,” Waters said. “Families understand the struggles that we’ve been up against.”

Organizers this time around kept the message on the levy centered on one thing: students. Door-to-door campaigns and student marches emphasized how the levy promoted and upheld valuable classes and extracurricular programs that many students felt were crucial to a well-rounded education.

“This is a great win for all of the students in the Battle Ground school district,” said Terry Dotson, the chair of Battle Ground Citizens for Better Schools, which was a primary organizer in support of the levy. “I want to thank the volunteers who put in countless hours in helping us to pass this levy.”

Battle Ground Education Association President Curtis Crebar referred to the levy as a “community investment in education” and urged those who voted no to recognize that it wasn’t all about teachers.

The levy also supported staffing in mental health resources that aren’t provided by the state. Dotson said he felt these resources were of utmost importance as students emerge from the isolation of the pandemic. Students at a “March to the Middle” at Battle Ground High School in October also said that the extracurricular activities like sports and music that the levy supports allows them to experience that sense of community at school, which to many is just as important as academics.

Waters, who was appointed superintendent in July, recalls the challenges posed by previous failed levies — such as a double failure in 2006. With this levy’s passing, he said it allows for the district to really move forward from the pandemic.

“I’m very, very excited,” he said. “This is a huge message of support from our community.”