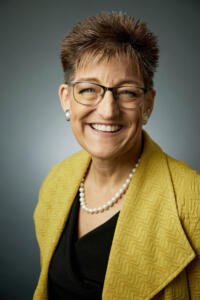 After 16 years as the chief executive officer of the Clark College Foundation, Lisa Gibert is stepping down.

The philanthropic organization, which supports Clark College and its students, will search for new leadership. But Gibert concedes that she’ll stay involved with some of the community college’s larger projects going forward, such as the development of newly purchased property in Ridgefield.

“I have been so fortunate to be at Clark and to have so many phenomenal things to be involved with and to inspire others to make their lives better,” Gibert said.

A graduate of the University of Oregon, Gibert began her career with the foundation, perhaps unexpectedly, in 1998, when she was hired as the director of finance and administration. She had worked a handful of finance and accounting jobs but did not expect to cross paths with higher education.

“I’ve always said that I’ve had jobs in the past, but it wasn’t until I came to Clark and the foundation that I truly found a career,” Gibert said. “It was bigger and bolder than the job itself.”

Her influence in the community extends beyond the numbers.

In 2016, Gibert was recognized as one of 40 women who helped shape Clark County in the “Founding Mothers: Portraits of Progress” exhibit, which featured portraits of each woman by local artist Hilarie Couture.

“It was such an honor,” Gibert said. “As I looked at all of those women that were on that list, so many of them you could only read about because they have come and gone. But so many I’ve had the opportunity to work with, and I just know that the passion and commitment to this community is huge.

“To line up beside these women is just unbelievable,” she said.

Gibert is the second high-profile area philanthropic leader to announce her retirement recently. Jennifer Rhoads, president of the Community Foundation for Southwest Washington, said last week that she would step down.

Gibert said her decision to step down, after many successful fundraising campaigns and seeing the transformation of Clark College and the county as a whole, wasn’t easy.

She will remain in her role as CEO until the current fundraising campaign ends in June 2022. This timeline allows Gibert to see out the final phase of projects — which she calls her “unfinished business” — and allows enough time for the foundation to select a new leader and for the transition between campaigns next summer.

No matter the role, Gibert will remain a familiar and influential face in Clark County.

“We as a collective are so fortunate to live in this community and to recognize how deeply people care and the amount of support that’s provided by everyone,” Gibert said. “I’m just so proud.”