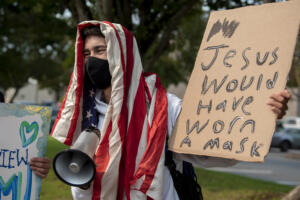 A Clark County Superior Court judge granted an injunction Tuesday prohibiting protests, rallies or other demonstrations that “disrupt educational services” within one mile of Vancouver schools.

The decision followed a lockdown at three schools Friday after some anti-mask protesters tried to enter Skyview High School.

Judge Suzan Clark issued the injunction, which remains in effect until the statewide mask mandate in schools ends, according to a press release.

“Our district understands and supports free speech and the right for people to be involved in peaceful protests,” Vancouver Public Schools Superintendent Jeff Snell said. “However, our first priority is to ensure student and staff safety and an educational environment free of disruption. This responsibility prompted us to present our concerns to the court.”

Groups protested school mask mandates Thursday and Friday before about 12 protesters approached the high school’s entrance, according to the school district. Skyview and neighboring Alki Middle School and Chinook Elementary School went into lockdown for about an hour that morning.

Counter-demonstrators, mostly students, held signs in support of the schools and masks Tuesday and Wednesday. Some students described hearing chanting last week from inside classrooms and being called names as they walked past protesters to leave school.