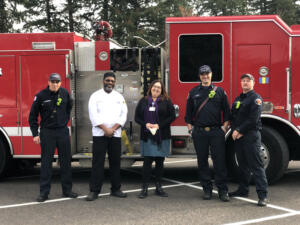 On Monday morning, firefighters, students and volunteers bustled about in the Clark College cafeteria and kitchen. The smell of home cooking and fresh coffee hung in the air.

Colleen Storey looked at the busy workers in white chef coats darting from one end of the kitchen to the other, carrying trays loaded with turkey, green bean casserole, mashed potatoes and gravy.

“I can’t believe I haven’t cried yet,” she said. “It just touches my heart.”

The meals being prepared are for 17 PeaceHealth hospice families. Storey is the outreach supervisor for PeaceHealth Hospice and Hope Bereavement Services.

Members of the Local 452 branch of the International Association of Fire Fighters teamed with chef Earl Frederick, a Clark College cuisine instructor, and his students to prepare the Thanksgiving meals that will be boxed up today and delivered by firefighters to the families for Thanksgiving Day.

It’s a Local 452 holiday tradition that began in 2012, according to Fire Capt. Tom Schell.

He explained that he once had a good friend — a firefighter — who stayed at PeaceHealth Hospice before passing away. Schell saw firsthand how much time hospice families devote to their dying loved ones, and how little time they have for things like cooking, let alone a Thanksgiving dinner.

The experience inspired him to devote some volunteer resources to PeaceHealth Hospice.

Those resources were put into action Monday morning: Firefighters, students and volunteers prepared a special meal to help lighten the load on hospice families during the holidays.

Over the years, various organizations have donated food, volunteers and other resources, and the number of families served has steadily grown. This year was the biggest yet.

“Times are hard right now,” Schell said. “It’s just about just trying to connect a resource with people who can use something.”

One year, volunteers delivered a meal to a family of 12. Two days after Thanksgiving, the matriarch of the family passed away.

“This way, they didn’t have to waste all their time in the kitchen cooking,” Storey said. “Instead, they got to spend quality time together.”

Another year, a family lost their loved one a few days before Thanksgiving, and volunteers still delivered a meal. It helped comfort the family after its loss.

Frederick teamed with the firefighters for the first time last year. According to Storey, Frederick “saved the day” by volunteering his time and resources amid the tumult of 2020.

“I’m a big community guy,” Frederick said. “I always like to give back and make sure that people get some nourishing food for this time.”

Frederick has been cooking professionally for 25 years, and he’s been at Clark College for five years.

He looked around the cafeteria as volunteers and students settled down for a quick lunch.

“Food is just a vehicle we use to build community,” he said. “I grew up in the church, so giving back has always been something that’s been a part of me. And that’s what this program is all about: We’re here for the community.”

“I knew I shouldn’t have worn makeup today,” she said.