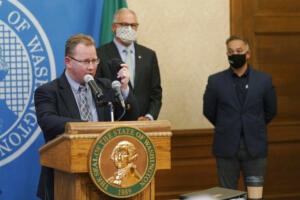 Over the past year, Washington state schools have received a historic amount in federal funding to weather the expenses of educating kids in a pandemic.

Already, some of it — around 13% of the roughly $2.6 billion — has been put to work in schools. In Seattle, 104 new school workers walk hallways, monitoring quarantine rooms and taking on lunchtime supervision duties. A few miles to the south, at Highline Public Schools, each campus now has its own counselor.

At the state level, politicians have used some of the funds to finance laptops and internet for students, and in the form of grants to nonprofits offering services to families.

But there are still questions about how a great deal of these funds will be spent. The U.S. Department of Education has held back hundreds of millions in aid to Washington until the state can provide a satisfactory plan to spend the latest aid package, worth around $1.7 billion. Experts say the feds are seeking more public transparency about how schools plan to spend the money.

Some school officials are already worrying about whether the aid will carry them through the remainder of the pandemic, as the road to normalcy seems longer and longer.

Here’s what we know so far about these dollars, and how school districts are spending them.

The money is intended to flow directly to school districts through a formula that prioritizes those with large populations of students living in poverty. In the Seattle area, for example, the Tukwila School District — where about 75% of students are low-income — will get the equivalent of $6,649 per student. Mercer Island, where only about 3.5% of students are low-income, will receive $263 per student. Some districts will receive nothing at all, and the state used its share of the ESSER funds to partially backfill for the gaps.

To put those figures in perspective, in 2018-19, Washington schools spent an average of $14,213 per pupil on education.

School districts have a great deal of leeway in how they choose to spend ESSER I and II, although federal and state officials have discouraged districts from making long-term investments, such as raises or new buildings, with these one-time funds. The third package, ESSER III, is more restrictive; schools must spend 20% of that money on initiatives that help students catch up academically.

Each aid package has a deadline for spending, the earliest of which is next September (ESSER I) and the latest (ESSER III) is September 2024.

How the money is being spent

State school districts have so far spent about $337 million across all the aid packages — the vast majority from ESSER I and II.

Big spending categories include health-related supplies such as personal protective equipment, technology and salary-related costs; some school systems are paying their employees extra to supervise meal times, and contracting to get more nurses, said T.J. Kelly, head of finance for the Office of Superintendent of Public Instruction, the state’s education department.

Beyond that description, it’s hard to tell more detail. The state’s dashboards showing expenditures are vague, and not comparable across aid packages. Kelly said the agency is working on improving its data reporting method, and will have more to share by November.

“We certainly know there is a demand for knowledge of how this money is being spent,” he said.

Washington is one of more than a dozen states, including Arizona, California and Colorado, that haven’t received federal approval for their applications for funds under ESSER III, the final aid package that passed in March and was part of the American Rescue Plan. This means about a third of the federal money isn’t yet accessible to school districts.

Marguerite Roza, a Seattle-based education finance professor at Georgetown University, said the state’s original application was “thin” on details compared with other states.

“We’re perplexed by Washington state,” said Roza, whose team has reviewed state applications across the country.

Under the law, for example, states are supposed to require school districts to submit detailed spending plans. In other states, like California and Missouri, the state education agency asked school districts to provide detailed descriptions — and dollar amounts. But in Washington state, OSPI only required districts to share strategies they would use to support students’ academic and emotional progress. The deadline for these plans was June.

In its most recent round of feedback to state officials, the U.S. Department of Education indicated that Washington didn’t show they’d met this requirement.

In a revised application sent back to the feds last week, state officials said they would be asking school districts this fall to attest that they’d engaged with their communities and would post budgets outlining how districts would spend ESSER III funds this school year.

They will be available for the public to review on the OSPI website in the next two weeks, said Katy Payne, a spokesperson for the state agency.

But Roza said that is not honoring the full requirement, since funds from the aid package can be used through 2024.

“This … doesn’t address the biggest issue of all,” said Roza, who reviewed the latest draft OSPI sent to the Department of Education. “That the state education agency needs to have districts submit a plan that describes how it will use its funds.”

In a statement, Washington state schools Superintendent Chris Reykdal wrote, “These one-time, highly flexible funds were intended to support districts’ emergent needs as they navigate the effects of the pandemic … Districts are already mobilizing their emergency relief funds differently than the budgets they just submitted for this school year.”

But Roza said school districts are allowed to change their spending projections if their priorities shift.

How school districts are using the money

Seattle, the state’s largest school district, has been allocated $145 million in total, about 14% of the district’s annual operating budget. It has used some of its money to hire workers to handle testing for coronavirus and to monitor the rooms at schools reserved for students who show symptoms of COVID-19. Around $35 million is dedicated toward covering the costs of extra employees and programs during the past school year, according to a budget presentation from June.

SPS also hired around a dozen nurses and social workers, and created a district-level COVID-19 response team. JoLynn Berge, SPS chief financial officer, says the district is expecting new funds from the state next year for school counselor positions, and with employee turnover, funding these other new jobs should be manageable.

At Highline Public Schools, Kathryn Peterson’s full-time job is managing what to do with the funds.

Highline has spent or allocated around 40% of its ESSER funds so far on costs to reopen schools — including health supplies, ventilation and operating a remote learning option, said Peterson. Funds were also used for online counseling for students, a new literacy curriculum and to pay staff for extra time spent during “family connection” meetings where school staff check in with parents at the beginning of the school year.

The 19,000-student district has set aside $4 million (around 4.7% of its $84 million in ESSER awards) to be spent at the discretion of a community panel that includes staff members and parents. The group is expected to deliver its recommendations in January.

Like Seattle and many other districts, Highline hasn’t yet spent or claimed much of the funds from the last package. Peterson expects the district will make those calls based on data about student mental health and ideas gleaned from surveys during the pandemic.

Officials there wonder how far the money will go as the pandemic stretches on.

“There is this big influx of dollars, but it’s really temporary, and it’s getting so eaten up by the additional costs of the pandemic,” said Rogers. “I worry that people think school districts are flush with cash … for a long time.”

OSPI, in consultation with state lawmakers, has used the ESSER III funds to create grant programs for community-based organizations that work with families and kids.

About $8 million will go to school districts to provide kindergarten preparation programs and $15 million to expand behavioral health programs in schools. OSPI has hired nonprofits such as School’s Out Washington and the Association of Washington Cities to assist with distributing grants to after-school programs and other youth enrichment activities.

It has also set aside money for school districts that didn’t get a lot or any relief money from the federal government formula.

But some school districts, such as Issaquah, have argued these supplemental dollars from the state aren’t enough.

“This is wholly inequitable and inadequate,” Issaquah School Board members wrote this month to Gov. Jay Inslee and state Superintendent Reykdal. According to state figures, Issaquah, a district of 20,000 students with 9% living in poverty, will get $350 per pupil.